Rocklands Conference Centre in Simon’s Town, about 40 km from the city of Cape Town. Nestled on the eastern side of the Cape Peninsula, the town was established in 1687, and served as the base for the Royal Navy South Atlantic fleet. The Rocklands Centre occupies a breathtaking site on the lower mountain slopes, and has spectacular views of the bay and beaches.

How to find Rocklands:

Rocklands Centre is located along the M4, a pleasant coastal drive.

Traveling on the M4, pass through Simon’s Town and drive on for about 3km.

There will be a small signpost for Rocklands centre on the sea-side of the road. This signpost will direct you to turn right, up Rocklands road.

Continue on Rocklands road. Skip the sign for Rocklands Farm; instead, carry on up the road as it bears right. You will drive past the large Rocklands Centre welcome sign.

Simon’s Town, is a village and a naval base in South Africa, near Cape Town. It is located on the shores of False Bay, on the eastern side of the Cape Peninsula. For more than two centuries it has been an important naval base and harbour (first for the Royal Navy and now the South African Navy).

The town is named after Simon van der Stel, an early governor of the Cape Colony. The land rises steeply from near the water’s edge and the picturesque village is boxed in along the shoreline by the heights above. The small harbour itself is not a particularly good natural harbour and is protected from swells by a breakwater that was built with thousands of huge blocks of sandstone quarried out of the face of the mountain above. Simon’s Town is now in effect a suburb of greater Cape Town. It is the terminus of a railway line that runs south from the central business district of Cape Town. In places the railway line hugs the steep eastern shore of False Bay quite spectacularly and in bad weather foam from some heavy swells will fly up and wet the trains.

The historical centre of Simon’s Town

Boulders Beach is located a few kilometres to the south of Simon’s Town. Here small coves with white sandy beaches and calm shallow water are interspersed between boulders of Cape granite. There has been a colony of African penguins at Boulders Beach since 1985. There is no record of the birds having lived here prior to that date, so their decision to settle in an area already well-utilized by humans is remarkable. There are only three penguin populations on the mainland in southern Africa; the others are close to Hermanus at Stoney Point and Betty’s Bay. 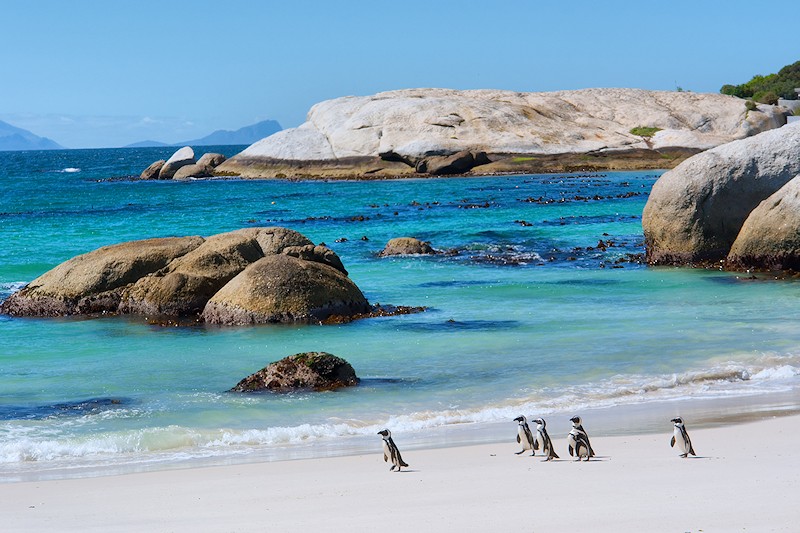